Examination: A multi-state North Carolina license is not issued when another state is claimed as the primary state of residence, however, a single state license may be issued until proof of North Carolina residency is provided to the North Carolina Board of Nursing.

Mail, email or fax your proof of NC residency to the North Carolina Board of Nursing using one of the below methods.

The Enhanced Nurse Licensure Compact (eNLC) has been implemented as of January 19, 2018.

The eNLC increases access to care while maintaining public protection at the state level.

Under the eNLC, nurses are able to provide care to patients in other eNLC states, without having to obtain additional licenses. Nurses with an original NLC multistate license will be grandfathered into the eNLC. New applicants residing in compact states will need to meet 11 uniform licensure requirements . Those who do not meet the new licensure requirements may still be eligible for a single state license.

The road from the NLC to the eNLC

States that are members of the eNLC will issue multistate licenses that allow you to practice physically, electronically and/or telephonically across a state border to patients located in other states that are members of the eNLC. If you hold a current North Carolina multistate license, issued on or before July 20, 2017, you will be grandfathered into the eNLC and no further action is needed from you unless you move to another state. As with the original NLC, if you practice in other states on your multistate license, you must adhere to the laws and regulations of the state where the patient is located. 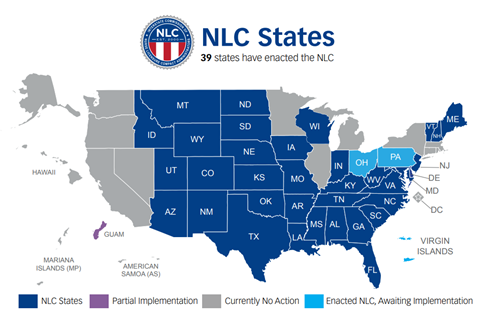 Questions? Send us your inquiry using our Contact Us Form.
Last Changed 22-Apr-2022

North Carolina Board of Nursing

Protect the public by regulating the practice of nursing.
Sitemap

Copyright © 2022
North Carolina Board of Nursing
All rights reserved